This story was originally published by ProPublica.

The CDC fumbled its communication with public health officials and underestimated the threat of the coronavirus even as it gained a foothold in the United States, according to hundreds of pages of documents ProPublica obtained.

On Feb. 13, the U.S. Centers for Disease Control and Prevention sent out an email with what the author described as an “URGENT” call for help.

The agency was struggling with one of its most important duties: keeping track of Americans suspected of having the novel coronavirus. It had “an ongoing issue” with organizing — and sometimes flat-out losing — forms sent by local agencies about people thought to be infected. The email listed job postings for people who could track or retrieve this paperwork. 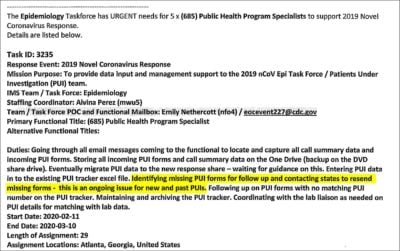 This email is among hundreds of pages of correspondence between federal and state public health officials obtained by ProPublica through a records request in Nevada.

During the period in which the correspondence was written, from January to early March, health officials were trying to stay ahead of the coronavirus outbreak underway in China. By mid-February, when the CDC job postings email went out, the virus had a toehold in the United States, where there were already 15 confirmed cases. In another two weeks, the first case of community transmission would be reported in California, followed shortly by cases in Washington.

The documents — mostly emails — provide a behind-the-scenes peek into the messy early stages of the U.S. response to the coronavirus, revealing an antiquated public health system trying to adapt on the fly. What comes through clearly is confusion, as the CDC underestimated the threat from the virus and stumbled in communicating to local public health officials what should be done.

The same week the CDC sent out the email about the job openings, the agency sent Nevada officials alerts about 80 potential coronavirus patients to monitor, documents show. Four were not Nevada residents.

A state epidemiologist, in each instance, corrected the agency, informing the CDC that the person was from New York, not Nevada. (The CDC then redirected each report to New York, the documents show.)

The confusion sometimes went both ways. On March 4, a program manager in the Nevada Health Department reached out to the CDC to ask about congressional funding for COVID-19, the disease caused by the novel coronavirus.

“There seems to be a communications blackout on this end,” the program manager wrote, wondering if funds would be distributed based on the number of cases in each state or by population.

“Unfortunately, there is no clear answer to your questions,” responded a CDC staffer, apologizing for the lack of information. “We are hearing all of the rumor mills as well.”

For much of February, the CDC kept a tight grip on who should be tested for the coronavirus, a strategy that has been criticized by epidemiologists for limiting the ability to track the spread of the disease.

In a Feb. 19 presentation to state health officials, the CDC described the definition of a person who ought to be tested: You had to have had close contact with someone confirmed to have COVID-19, or to have traveled from China and then had respiratory symptoms and a fever at the same time.

However, the CDC’s own guidance from a month prior, distributed to the states on Jan. 17, had a footnote that said that “fever may not be present in some patients,” such as people who had taken fever-lowering medications, according to one of the documents obtained by ProPublica. That caveat was not on the slides presented to the states in mid-February.

In a statement to ProPublica, the CDC said clinicians could always use their judgment to decide who received a test. “CDC never declined a request for testing that came from a state or local health department,” the agency said.

Diamond and Silk Push Dangerous Coronavirus Advice, Get Locked Out of Twitter

Enjoy our work? We accept donations through safe PayPal